Anyone that says playing music is a young person’s game is either ageist or pretentiously stupid. Getting older doesn’t mean you lose your fire or aren’t frustrated at things, if anything, you get madder and wiser. Mike Gee of Rocket 77 is an example of this. His punk rock band has been making politically charged punk rock the last few years and not much has changed since growing up out west.

“I’ve been putting together shows since was sixteen and I’m staring at 50 here at a year and a half,” Gee said. “Some people ride dirt bikes; I play in bands and do shows. There’s songs I wrote in my youth that I’m really glad there’s on recordings of them. (But it’s like an old photo) We both grew up when there wasn’t a camera to document everything, which is probably a good thing.”

He and The Juggling Gypsy will be putting on the second Port City Blitz, a showcase of bands over two days starting April 19th. For the second they decided to focus on the local scene and bands will play thirty minute sets on two stages, inside and outside over two days, what Gee calls “Warped Tour-style.” Showcases are hard work to organize and Wilmington is no stranger to them (W.E. Fest, Carolina Pine Music Festival, Helping Hands, CuzFest, Alt-Zalea). 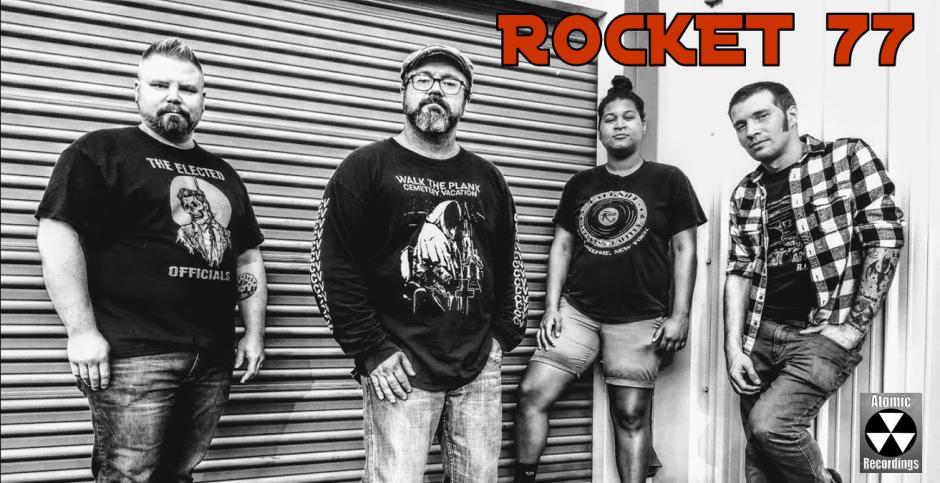 “I spent twenty years in Phoenix and we didn’t have a place there quite like the Gypsy. We had places on their way to being that but there was a lot of turnover, especially a venue that can do all ages. Hard to keep them open. (Gypsy) is a great place for bands to play. The Gypsy, and Reggie’s. It’s like going to a house party where you can get a mixed drink.”

Gee relocated from Arizona to Wilmington, forming Rocket 77 in 2015. While living in Phoenix, he posted on Craigslist inquiring about Wilmington. Bastard Brigade’s Eddie Oakes (Patriot) reached out and the two became friends, their bands later sharing a concert bill.

This is the second showcase. How did it come together last year?

Gee: The first one was in October after Hurricane Florence. Our plan is to do two a year, maybe three; it depends on how things come together. The first one was supposed to be a (Rocket 77) CD release party but the hurricane (Florence) came. This time we thought, let’s put together something else as a make-up of that. Let’s do something and not focus around us and on the scene. That’s how Port City Blitz came together. People wanted to play and we ended up doing two days instead of one.

So what happened with the album?

We were supposed to do a final mixing on the new album but we ended up spending the week preparing for the hurricane. When we got back together, sort of back to normal lives, we felt it was tainted. We’ve been plotting over the winter to re-record it. Our drummer just let us know five weeks ago that she was moving out of town in May. So we decided, let’s just keeping writing songs and see what happens.

We just grabbed the drummer from Slamurai. We reached out to him and a week and a half ago we jammed together. He’s a great drummer and easy to bring into the fold. What’s hard is that (current drummer) Alexis has been with us two and a half years and she’s driven our sound in a more aggressive direction with her drumming. She definitely has a legacy that she’s leaving behind. It’s funny, she has no plans to play in any more bands after this, and she might sell her drums. I said, No! don’t do that.

The showcase is primarily ILM bands, was that always the intention?

It’s based around ILM bands. With my band we have a network of bands throughout the region we trade shows with. I like bringing in out of town bands, it adds flavor to it. Our friends in Poison Anthem, they’ve been doing an ongoing series that goes around the state called Punk Rock Smackdown. This is the same idea but we’re keeping it local for now. That’s the inspiration of it. They try to do a ton of bands in one day. We’re going to keep to the two-day format, and that allows us to bring in more bands.

The bands will do short sets?

It’s going to be Warped Tour style, thirty minute sets. One stage inside, if the weather is good we’ll do an outdoor stage on Saturday. Two stages starting at 7 o’clock, it will be going rapid fire. It doesn’t stop until after midnight. The last band to play outside has to be done at ten o’clock.

How often do you play guitar, are you a once a day player?

I don’t play nearly as much as I want to. When it comes to the band I’ll spend one or two days a week and sit down and play guitar. I think it’s a product of life. I don’t even have a guitar at my house, which is hilarious. People come over and say show me your guitar collection. Well, we have to go over to this other building. We usually practice once a week as a band. On a week we don’t I go over to the practice space and noodle around a bit.

You’re of a certain age, are you consistently surprised impressed with how much creating is going on today?

Yeah, I’m surprised, I’m impressed, I’m disappointed. Kids now have it so much easier. Back when I started out you made fliers and stood on a street corner on a Friday night. That was our social network. We have a couple of bands on the bill with young kids that have more drive and more creativity than I could ever have claimed back in the day. It’s good to see the next generation coming up.

Deadly Edibles – they’re a force to be reckoned and they’re really just getting started. I’ll be interested to see what those two are doing in ten years, fifteen years. Their talent and their drive is insane. On top of that they’re just good people. Those two kids are humble and they’re just like, I’m here to absorb. That’s a big part of what makes them who they are.

What about the ’77 era bands resonated with you? Is it the simplicity, the ferocity?

One of the first bands I got into, I was working college radio and I discovered Ramones. I grew up in central Kansas, it’s not like I had a great record store down the street and could go through the bins. So this radio station really opened me up to things. I got turned onto Ramones and that led me down to the path and to a lot of the English bands, The Vibrators and so on.

I drew inspiration from those bands because my childhood, my mom and dad drilled 50s rock and roll into me. I thought, this is 50s rock and roll here, just a lot louder and a lot faster. That’s the foundation of everything I do nowadays. You don’t always listen to a song we do and go, oh that sounds like a band from that era, but it’s absolutely inspired, the foundation is there, as well as a band like Pennywise and other modern bands.