Creating a film score is a proper use of his skills

If you know Thom Kunz’s work over the last few years then his new release TRANSM17SION shouldn’t come as a surprise. That’s not a slight; it’s to acknowledge his output thus far has often had a cinematic palette (see his Paper Brain). The idea of him doing a ‘film score’ is more a given than a surprise. With this album he worked alone and without lyricism to express ideas. Here he gets to work broadly, have fun, and use pure musicality to express emotion or landscapes.

Creating a film score is a proper use of his skills, and hopefully lends itself to some filmmaker’s project down the road. But here Kunz gets to dig deep into what fans of horror and sci-fi film scores of the late 70s and 80s adore – synth, dread, colors, stark tempos, and careful plotting. Much of this type of music rarely saw the light of day in its initial run. Thankfully labels have popped up in the last five-plus years to release it properly (Waxworks, Terror Vision, Lunaris Records) on vinyl, CD, and cassette formats, whether its a well-known film or much lesser known (Spookies, Ghosthouse). 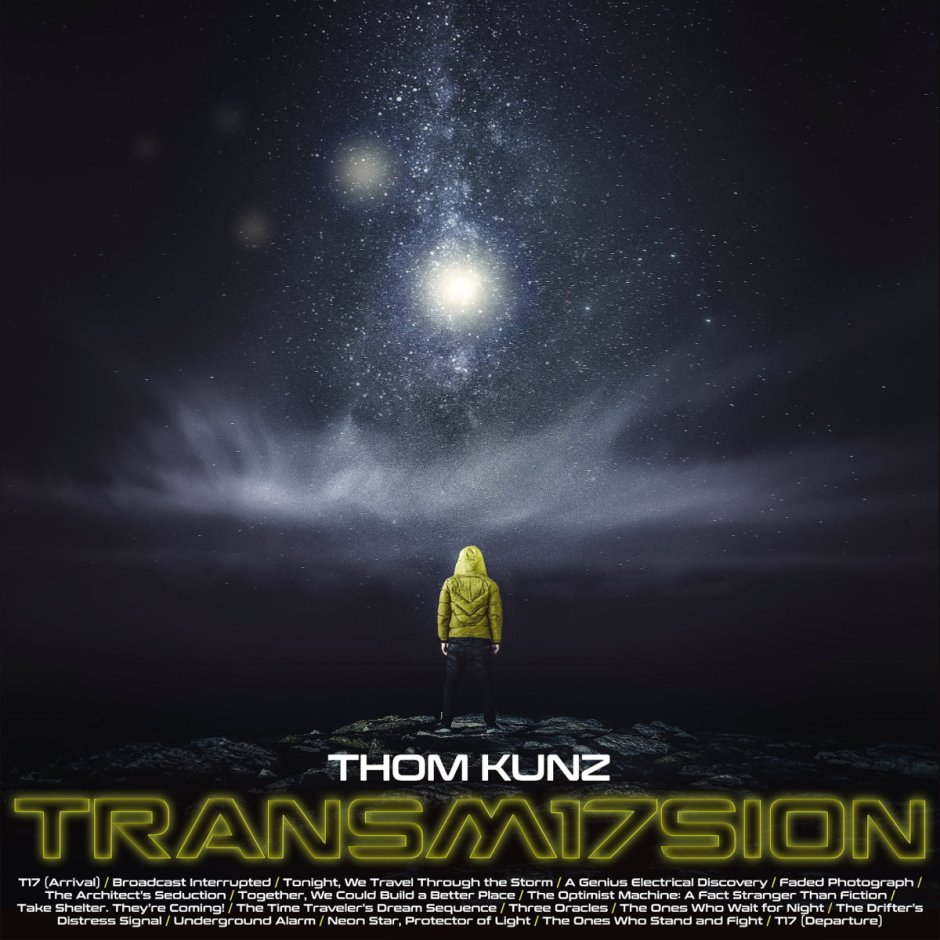 And there’s been resurgence for some of its creators. John Carpenter has created new music with his son and performed shows, as has his co-creator Alan Howarth. Taking inspiration from composers like Carpenter, Howarth, Richard Band, Chuck Cirino, and more, new artists have fostered their own catalog of new ‘film scores.’ Night Runner and English composer Antoni Maiovvi digs deep into what a synth-y 80s cool film score is and Wojciech Golczewski alone has stayed busy creating, both for real films and imaginary ones (find his “Reality Check”). It’s addicting stuff, something about the synth and atypical melodies that take you far way or on a fun ride (check out “Surf Nazis Must Die” released on vinyl a few years ago).

But with TRANSM17SION Kunz has fun, and goes for some drama. He digs deep into the wealth of variety of these scores from the past offer. The album isn’t as retro as he might proclaim it. It doesn’t wink at the listener, or use an old style to say, isn’t this cool? His album is lengthy, like an ‘extended version’ of an actual score, and it never wears out its welcome. It only gets more serious as it goes along, and a bit tense with “Neon Star, Protector of Light.” Plus, his cues aren’t short, not subjected to the whims of a director’s scenes and ambitions.

The album is described as a “retro horror/sci-fi soundtrack to a non-existent film.” Musically it feels more like the latter, but his nods to the horror genre play out well (“Faded Photograph,” “The Ones Who Wait For Night”) and sometimes the genres blend (“A Genius Electrical Discovery”). Ultimately, the album is its own beast – moody, spacey, haunted, distant, cool, and while it may not be wholly specific throughout, it sure is enjoyable.

Kunz has created a large world here and it will take time to devour and compress. But that’s joy isn’t it, to have something that continues to reveal itself to you. His paintbrush likes to travel, and if you’re a fan of film composers with an eye for electronic and/or colorful – Vangelis, Angelo Badalamenti, Benjamin Wallfisch, to name a few, then this will suit you. It will spook you briefly, and mainly it will transport you, but that’s up to you.