Local pop-punk band Villain! released their full length album No Place to Behave recently and its the kind of music arriving just in time for spring and summer. On album opener “Press Play” Villain! lead singer Carlos Perez sings a chorus of “the night won’t end.” It’s defiant, one calling out for people to have a good time on an album primed to have its songs blasting from cars, summer heat be damned.

No Place to Behave is a fun, boisterous album, one spilling over with infectious energy led by Perez’ excellent vocals and the band’s frenzied musicianship. So many bands playing this style of music will over do it, adding cookie monster or screamo vocals against the mainstay of soaring rock vocals. Not so here. This album shows a band with confidence and having a blast.

Villain! takes playing seriously but songs feel carefree. It’s a potent combination, and a breath of fresh air with all the cynicism and negativity these days. Across eight tracks they deliver high flying energy with a raucous vibe. The songs are combustible guitar and drums, caustically paired with Perez’ soaring vocals.

They released an EP a year and half ago with three tracks hinting at where they were headed. “Blackfaced,” “The Captain,” and “Afraid of What” revealed hearty, emotional songs buoyed with wild guitar work that both crushing and playful. The result was material that sounded big and done with ferocity. No Place to Behave delivers on the promise of those songs.

It’s a youthful sounding album, lyrically and musically. Songs rip and tear, like a teenager on the run. “Frogs” is a gallant rocker, a gather-round-the-bar rager. “The Captain” is an album highlight. Songs are peppered with back-up gang vocals and underwritten with double guitar playing by Kyle Watts and William Zachary III. Jared Boyd’s percussion and Aaron Boyd’s thumping bass lend rapid, explosive qualities while maintaining the thrill ride vibe. Perez’ vocals are a blend of confession and desperation but all heart.

Villain! enjoys the best of both worlds – hard rock and pop rock. It combines the hard hitting aspects of heavy rock bands with melodic aesthetics of a more accessible rock band. Even better, they play songs with integrity, compromising nothing and end up with songs with both heart and fist fight tenacity. To put a face on it, the album is like a big wide grin with fangs. 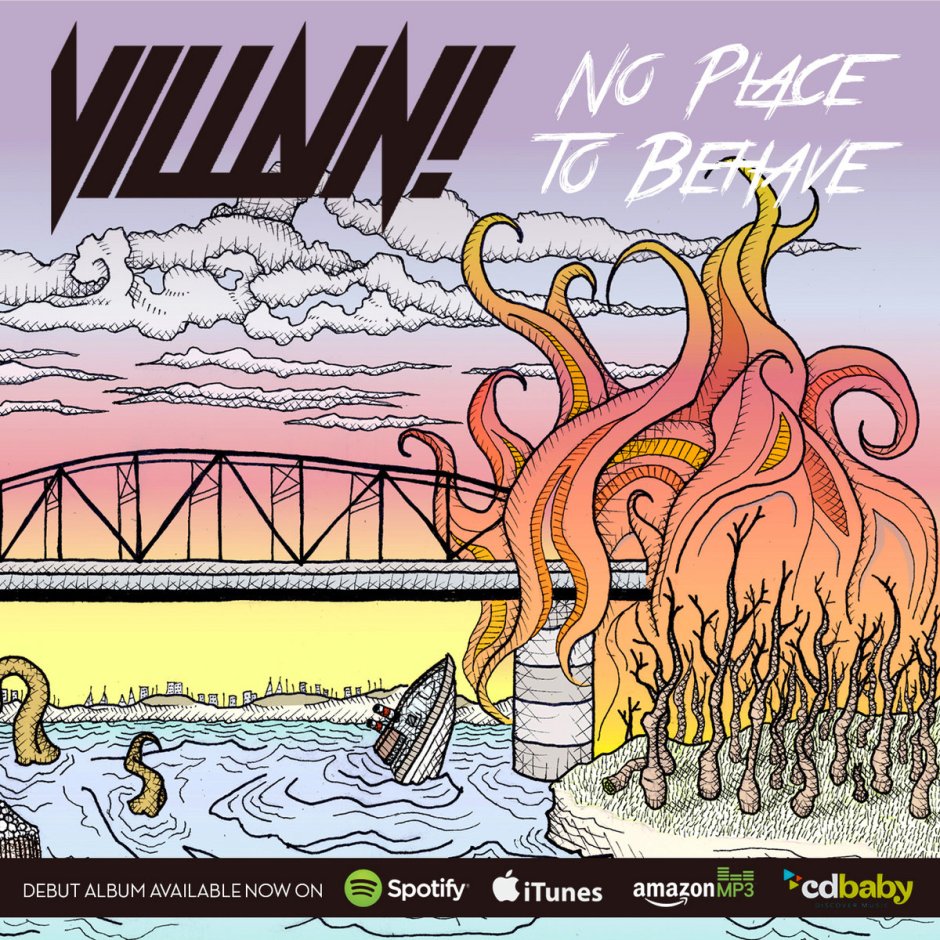