Characters created by filmmaker Wes Anderson are the source of inspiration for an art show Friday evening at Luna Caffe on Castle Street. The opening for Surf City artist David Mercer was an early stop for some viewers on the monthly Fourth Friday self-guided art tour. The artist’s latest series of acrylic and mixed media paintings is a celebration of Anderson’s colorful characters across much of his film career.

Around the coffee shop were interpretations of characters from Anderson’s films like The Darjeeling Limited, (Mercer’s favorite) The Royal Tenenbaums, Moonrise Kingdom and The Grand Budapest Hotel.

“I think he’s very character driven,” Mercer said about what resonates about Anderson’s movies. “He’s so involved (with them) throughout the (films).” 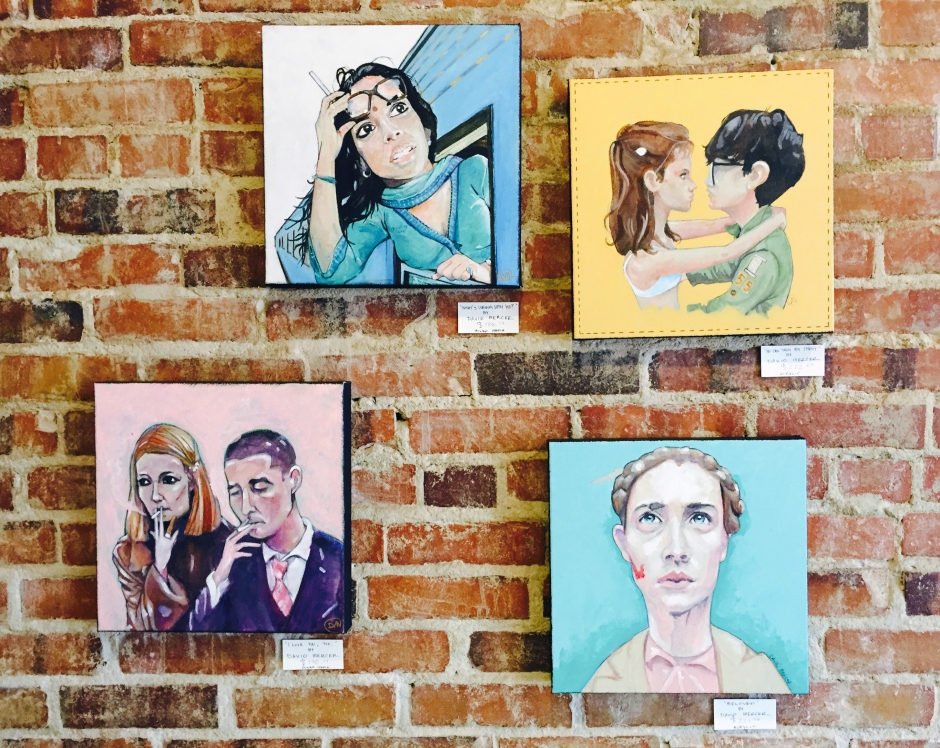 The paintings bridge well-known characters while imbuing them with a sense of playfulness or introspection. The young teenagers from Moonrise Kingdom are profiled tenderly and a large painting of Ralph Fiennes extols his buoyant character in Grand Budapest. Gene Hackman’s Royal Tenenbaum is equally out sized, much like his character, and given colorful churlishness.

Mercer cited symmetry within the framing of the film scenes that serve as something to work from as well.

“You get really invested in them and want to see more. Sitting down and painting allows you more to spend more time with them.”

Self taught and painting off an on since high school, Mercer’s sketch book work captured people’s attention. It led to being asked to do an art show and he was the first artist featured at Luna Caffe when it opened.

For this series, he wanted to create more from Anderson’s stop-motion animated Fantastic Mr. Fox (“there’s still time, he says with a smile) and initially aimed to create three images from each film. Rushmore and Bottle Rocket, Anderson’s first two films, aren’t represented, but anyone who’s seen them would probably agree they warrant a series each.

For paintings Mercer would augment images selected from the films, making them his own while retaining the character’s humanity. When creating a piece he’ll create a sketch, get an idea going, and see if it can actually be translated to a bigger piece.

“I try to make them a little wonkier than the direct image and try to stay true to the eyes. I like to play with the shapes of their faces.”

Mercer worked on the series in January and February. When he needed a break he returned to the sketchbook.

Hanging on the wall in the back of Luna Caffe are two rows of pages torn from that sketchbook. The unconnected images illustrate a creative mind poured out in colorful drawings – like a loving portrait of Christina Ricci from Addams Family Values, a detailed cartoonish advertisement, and more colorful images inspired pop culture.

The Wes Anderson series will be up for a limited time.

The original paintings are for sale and there are prints for sale ($10, $12). 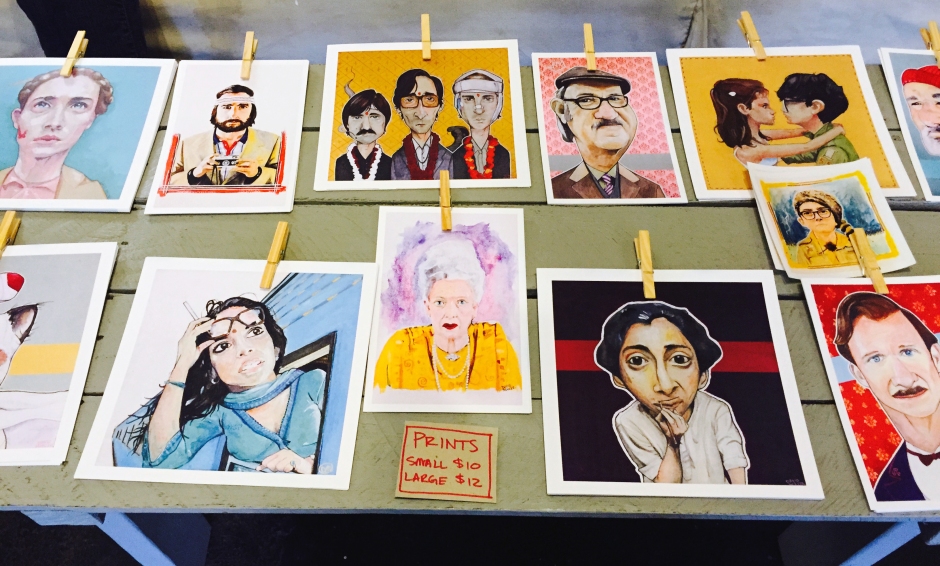