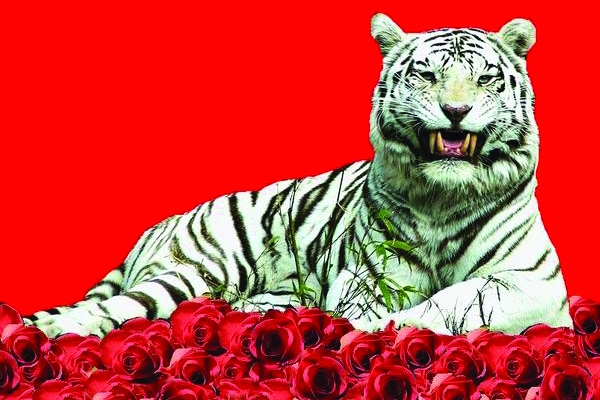 There’s a fine anomaly to White Tiger and the Bed of Roses, whose song titles are elegantly long-winded as the band’s eagerness to which they play them. The name is meaningless and perfect. Members have changed a few times since forming in 2007 but the largesse is still the same. Their album release show at Reggie’s was an example of an idea that won’t die and keeps mutating – a fiery band working onstage, one that played loud, hard, fast rock and roll.

White Tiger grinded rock ’n roll through a whiskey soaked punk filter that bore melodic and atypical changes, making great use of dual singers – guitarist Matt Hearn who alternated between guttural singing to outright screaming and bassist Adam Thompson who opened his mouth to scorch the room with a voice that shouldn’t come out of a guy who looked rife with schoolboy charm.

Thompson killed on the burner “Everyone Gets Retarded When They Get the Party Started” and continued with “Heroes & Legends.” “Flashlight” was a standout, a song whose singular guitar riff was like a siren going off and guitarist Ian Millard crammed in a heavy amount of frets along with a multiple note-filled solo. The songs were built on heavy riffs that whipped the crowd versus inviting them, drawing people in more. The excess hit like hard rock shot through a wood chipper into the crowd’s face.

“Here’s a love song,” Hearn said before “Playground Sadist.” His coarse-just-woke-up vocals boasted a don’t care attitude that fit the band’s sound. But it was “a power ballad” called “Windows” that was slightly out of character for them yet hinted at the band trying different moods, built on calculated descending riffs and a hint of surf guitar. The resulting boom and crash aesthetic worked well, albeit in a deliberately ragged fashion.