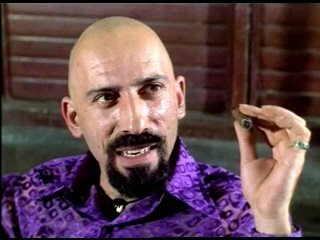 A week or so before I was to meet Sid Haig, I watched House of 1000 Corpses again for probably the upteenth time. As I watched, I realized that a character in the story begins to interview Sid as his character, the infamous Captain Spaulding. And after just a few moments, Sid looks at the inquisitive character and says, “How come you’re asking so many jackassy questions?!” From that point on, that’s exactly how I envisioned my interview with Sid going – my dorky inquiry quickly shut down by a less than excited subject. At best, I was hoping to not get stuffed and turned into Fish Boy.

The bearded 6’4″ actor is still menacing to see coming toward you, but speaking to him, you find he is a bright, charismatic man who’s paid his dues in the movie business. Haig has appeared in 60 feature films and over 350 television appearances. Simply, Haig is a working actor who didn’t set out to be a star, just a man who loved acting and dedicated enough to devote the last fifty-plus years to its craft.

Born Sidney Eddie Mosesian in Fresno, California in 1939, Haig’s acting career began by accident. Due to growth spurts Haig exhibited poor coordination which led to dancing lessons and performing. In high school he played drums in a variety of bands but steadfastly focused on acting. After moving to Hollywood Haig became a staple in films by Jack Hill – Spider Baby, Coffy and Foxy Brown. He also appeared in Diamonds are Forever and George Lucas’s futuristic first film THX-1138.

The actor spent much of the seventies and eighties playing character roles on shows like The A-Team, The Dukes of Hazzard, Fantasy Island and Charlie’s Angels before walking away. In 1997’s Jackie Brown he played the role of a judge that Quentin Tarantino wrote specifically for him. Many today know Haig from Rob Zombie’s House of 1000 Corpses and The Devil’s Rejects as Captain Spaulding.

A lot of people don’t realize that you started off in music.

Haig: When I was nine years old, I showed an interest in music. We had a little elementary school band and my parents kind of got tired of me beating up all the pots and pans and everything. So they had a friend who was an old drummer that was looking to get rid of his trap set. They bought that and it just kind of evolved. Playing in the orchestra, marching band, I was playing every opportunity that I had. We formed a band when I was in high school and a year after graduation we got signed to a contract with Keene Records, which is Sam Cooke’s label. Things kind of took off from there. Crooked managers, crooked record companies – crooked man with a crooked stick with a crooked dog. [Laughs] And I just said, “You know what, the hell with this.”

Did you guys try to find a recording contract, or did they just hear you?

They heard us. A friend of my father’s had a recording studio and he listened to us and said, “If you guys want to practice in the studio, go ahead.” He gave me the key to the studio. That was kind of cool. And then he heard us one night and he decided to cut a demo. We did that and then he basically sold the contract to Keene.

And then you enrolled in Pasadena Playhouse.

A friend of mine and I were standing outside my parents’ house trying to figure out what we were going to do with our miserable lives. And he suggested that I go to Pasadena Playhouse. I had no idea what it was so I checked it out and said, “Oh yeah, this sounds like the kind of place for me.” So I did that. It was two years of actor’s hell. First class in the morning was 7:30 and you never got home to do any of your homework or anything else until about 11:30 that night. And that went on for two years. It was pretty hardcore, but it gave you the discipline you need to be in this business. There were no little stars on your door or anything like that. You were just a grunt beginning to end.

That prepared you, because you were a busy working actor for many years.

Yeah, that’s what I wanted to be. You know, a “working actor.” I had no stars in my eyes, still don’t. I knew that there was no glamour; there were no limousines or bright lights. That was just a show that happened every once in a while. So my goal was just to become a working actor and I was. And I worked myself out of business. Then I had to restart my career four times because I was just working too much and people got tired of looking at me. Well, studios got tired of looking at me. But now things are different. Now I call the shots.

With the way you used to get cast, being a well-trained actor, how did feel about playing a thug over the years?

It got real tiring. And so at one point, I think it was ‘92, I just said, “You know what, if these guys can’t figure out that I can do more than stick a gun in someone’s face, I’m out of here.” So I left. And I got a call from Quentin Tarantino one day, still don’t know how he got my number, and said, “I know all about [how] you don’t want to do heavies, blah blah blah, all that stuff. I’ve written a part for you in Jackie Brown as a judge, totally different. And you will do it.” [Laughs] Okay. And that was cool; it was a good feeling to know that somebody could figure out that I could do more than what I was doing. And then, of course, House of 1000 Corpses came by and now we’re looking at history.

At that point, what did you think of Captain Spaulding the first time that you read that role?

Well, the way that I got it was that my agent said, “Go to this office building and sign a letter of nondisclosure. Take the script home, read it. If you like it, the part is yours.” So I did that and said, “Oh geez, I can have a lot of fun with this. Yeah, let’s do it.” And then it was the day after the premiere I got a call from Rob. He said, “I don’t have a lot of time to talk. I got a reporter from Variety on the line. If there’s a sequel, will you do it?” I said, “Yes,” and he said, “Okay, I’ll talk to you later.”

Getting familiar with the character, did you realize how much impact it would have on your career?

No. No, I just thought it was something fun to do.

Captain Spaulding has a very interesting manner of speaking. Is it something that you came up with, or Rob?

Rob gave the character a great skeleton. And years of hanging out in biker bars and redneck bars and all of that stuff, and being a farm boy, I was able to bring that culture into the character.

The “shit the bed” line now haunts you. Where did that come from?

That just came out of my head. It’s something that I probably heard a lot, and there it was. And now, it was maybe like two or three months after the film was released, I got an e-mail from a guy who said that phrase had become the official phrase of the college he was going to.

Well that says a lot about that school.

Before House of 1000 Corpses came out, what were your feelings on clowns?

You know, I never got the whole clown phobia thing. Clowns are funny. They were funny, they were stupid; they were, you know…whatever. But to me, they were never scary.

Have those feelings changed now that you’ve become well-known in makeup?

[Laughs] Geez, I love ‘em. They’re keeping beans on my plate. And you know, nobody can predict this kind of stuff. I mean, when they told us we were going to have action figures, I went, ‘What?! These guys are despicable people, and we’re going to have action figures?’ And to date, I think I have ten different models. And now there’s some guy in the UK that’s done a Captain Spaulding bust that they’re selling. It’s amazing.

But you know, I think the thing that is appealing [about] the character is that he’s fearless. He doesn’t take any shit from anybody. You stick a gun in his face and he’ll stick a chicken leg in yours and then wind up killing you. [Laughs] And I think people get pushed around a lot in our society, so they can really identify with someone who refuses to get pushed around.