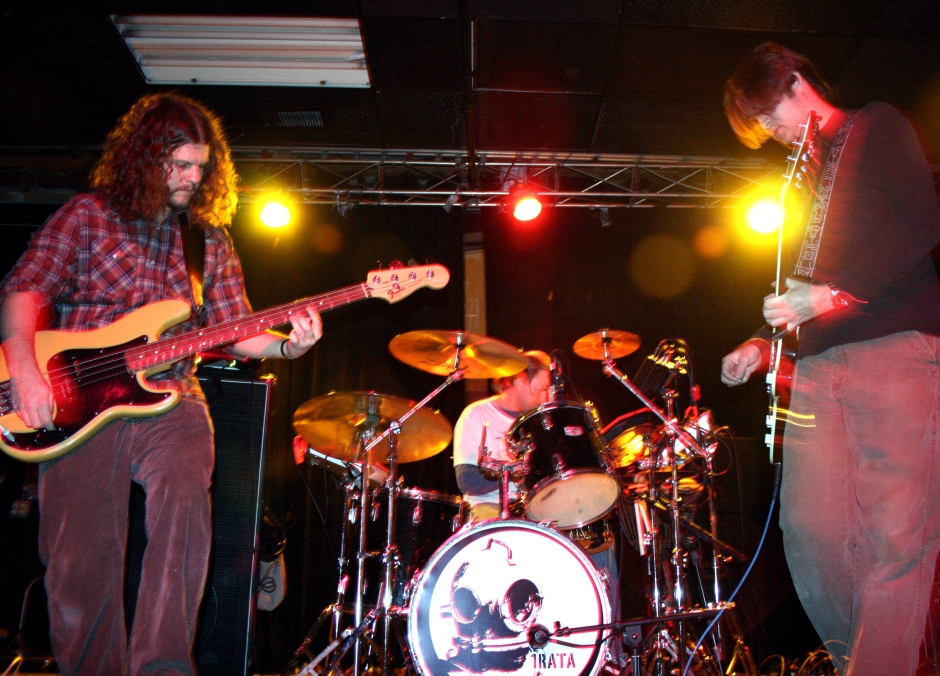 Irata, an instrumental three piece Irata from Greensboro, N.C. began their set on a mostly dark stage at The Soapbox. It was a cold and dreary evening. Mist could be seen outside the third floor stage window as yellow street light peeked around the edges of black curtains at the rear of the stage. That January night was appropriate for the show – an instrumental journey into mood, vibrancy, and melodically dark undertones that were at once fun and driving but equally edgy.

Bathed in red light band members seemed to emerge from darkness throughout their performance, as if taking time to step away from shadow. Behind his drum kit Jason Ward was nearly hidden, accompanied by additional percussion, alternating from drums to hand drumming. Jason Duff, who played guitar as well as saxophone, lent a sonic playfulness to “Infinite Eight.” Duff’s saxophone was attached to a microphone stand and filtered the notes to give it an otherworldly sound, at times like a more harmonious version of sounds from War of the Worlds’ alien invaders arrival. Jon Case’s bass lines popped, adding notes that bounced and circulated the room.

The music was comprised of steady drumming and fuzzed-out guitar that was less about riffs than mood. It played like a soundtrack underscoring coarse, emotional moments, but musically it felt important, as when language is spoken in dire or important measures. Songs were immediate, in the room like a man with ominous purpose and heavy with meaning – all of this performed without a lead singer to carry the message. The band told a story on its own, notably on “Eye of Ra” which navigated from world music tones to guitar lines that felt like Dick Dale channeling the sitar.

“Clown Rehab,” an innocuous and humorous song title, displayed the band’s mainstream side, highlighted with a grinding guitar riff that weighted the song and gave it a superb groove. Ward’s drums were persistent, a non stop assault set against a driving guitar run. It echoed the early nineties, King’s X perhaps, but Irata delivered its own ambiance.